Home » Blog » Can I Vacuum Pool After Adding Chemicals? 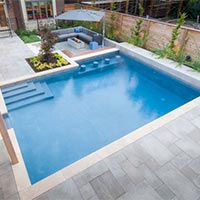 Although backyard swimming pools are places of recreation and fun, there are maintenance duties that you need to perform to keep the water clear, clean and safe. The frequency and order of these duties will play an important role in the amount of work that’s necessary to keep the water fresh. People often ask questions such as, “Can I vacuum pool after adding chemicals or does it need to be done beforehand?” In this article we’ll go over the process of pool shocking and what that entails.

Vacuum and Shock or Shock And Vacuum?

Shocking your pool refers to adding chlorine to the water to improve its clarity, remove chloramines and kill off bacteria and algae. After shocking your pool, the water should appear clearer and the chemical odour should be reduced. Bacteria will be neutralized, and algae growth will be interrupted. Vacuuming removes debris and algal growth from the walls and floor of the pool and should be performed before shocking the pool water. Vacuuming before shocking allows the chlorine to be more effective in disinfecting and clearing up the water and breaking down skin and nose irritating chloramines.

Vacuuming a pool is similar to vacuuming in your house but can be much more labour intensive. You probably don’t need to vacuum the walls of your house, but you will definitely need to scrub down and vacuum the walls of your pool. Most swimming pool vacuum heads also feature a brush which allows you to do both jobs at once. There are now several types of robotic vacuums on the market which allow you to swim, relax or leave the house altogether while the robot goes about its business. No matter the type of vacuum you have, the more often you do it, the less onerous the job will be.

To shock a vinyl liner pool, you add a liquid chlorine solution to the water. Adding powdered chlorine directly to the water can lead to bleaching and breakdown of the pool’s liner. You may have to create this solution yourself by mixing powdered chlorine with water or you could use the more expensive premixed liquid chlorine. Shock should be added after vacuuming and separately from any other pool additives or chemicals. Be attentive to any strong winds to prevent the liquid being splashed on your body or the surrounding surfaces.

As mentioned, you should vacuum your swimming pool as much as possible to keep the job manageable. However, after shocking the pool, you shouldn’t vacuum for at least 24 hours. Running the water pump during this period will allow the shock to do its job. After 24 hours, debris that was disturbed during your previous vacuuming may have settled back to the pool floor, so giving it another vacuuming will get rid of most of the dirt.