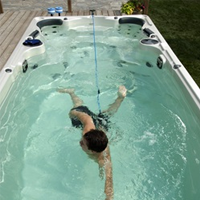 Swim spa exercise pools are an ideal way for those who love to swim and spend time in a hot tub in the privacy of their own property yet don’t have enough space to install a full-sized swimming pool with a complimentary hot tub.  A powerful water pump is able to create a current that’s strong enough to hold a swimmer in place while they practice their stroke.  And because the water tank is quite compact, it’s easy enough to turn up the heat and use it as a hot tub as well.  Some swim spa exercise pools allow both the hot tub portion and the swimming tank to be used at the same time.  Obviously, the most important part of a swim spa exercise pool is the pump that holds the swimmer in place.  To demonstrate how exercise pool pump works, we’ve put together an article covering their function.

Swim spa exercise pools first became popular in the early 1970s.  They were ideal for swimmers with a smaller backyard which didn’t have enough room for a full-sized pool.  These first models were known as pressure driven machines and used powerful water jets to create the current for the swimmer to paddle against.  The first models of swim spas were criticized by some because of problems with turbulence caused by both the water jets and the motion of the swimmer.  Some argued that this made for unnatural swimming conditions, whereas others, namely triathletes and outdoor swimmers, argued the turbulence actually mimicked the conditions found on the ocean or a windy lake.

In the 1980s, to combat the turbulence created by pressure-driven machines, some swim spa manufacturers evolved to produce volume-driven machines.  These systems were built to reduce the turbulence of the current and create swimming conditions that were more comparable to those found in a full-sized swimming pool.  Volume drive machines use paddle wheels or propellers to create a wider, less turbulent current than those found in the early pressure-driven models.

Modern day pressure-driven systems have evolved to tackle the problem of excess turbulence commonly associated with swim spas.  Two different types of jets are used to create the current for the swimmer.  What’s known as a buoyancy jet is used to create a current of water to elevate the swimmer.  The buoyancy jet is combined with wider nozzled jets that eliminate the natural tendency of the current to rotate which is a significant cause of turbulence in pressure-driven systems.  The shape of many modern-day swim spas has also been engineered to reduce the amount of backsplash that occurs when the current reaches the far end of the tank.  This allows for a smoother, continuous, one-way current for the swimmer to work against without experiencing excess turbulence.

Modern-day volume-driven machines have also undergone an evolution in the effort to create a more natural swimming pool-like experience.  This technology relies on moving much larger quantities of water per minute than the pressure-driven systems.  The result is vast quantities of water moving at a low pressure to create a bubble free, low turbulence water flow.

All modern-day systems allow the speed and strength of the current to be controlled to allow swimmers of all capabilities to use them with ease.  As property prices rise and space starts to come at a premium, swim spa exercise pools have become a more popular method of at-home swimming.