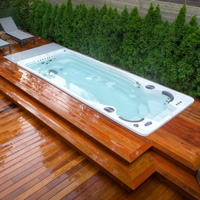 Those looking to add some water-based recreation to their home or backyard might feel they’re limited to swimming pools or hot tubs. But there’s an alternative to those choices that gives you the best of both worlds. They’re called swim spas. To help potential buyers understand what swim spas are all about, we’ve created an article that gives a basic rundown on what swim spas are, how is a swim spa heated, how energy efficient they are and more.

What Are Swim Spas?

Swim spas might be considered a combination of a swimming pool and a hot tub. Swim spas are much smaller than full-sized swimming pools but larger than your average hot tub. To allow swimming to take place in the smaller area, the swim spa creates a strong current to swim against. This means the swimmer stays in place while performing their stroke, never reaches the end of the spa and never has to turn around and swim in the other direction. You could compare it to jogging in place on a treadmill. On the hot tub side of things, many swim spas feature the powerful water jets that create the massaging sensation that hot tubs are known for. Swim spas can also contain customized seating arrangements, powerful water heaters and entertainment options.

How Is A Swim Spa Heated?

Compared with a full-sized swimming pool, it’s much easier to control the temperature of a swim spa. A lot of this has to do with the volume of water you’re trying to heat or cool. Therefore, swim spas can be used year-round, even in the middle of a Canadian winter. The temperature you keep your swim spa at really depends on what you’re using it for. If you’re mainly swimming and maintaining a steady stroke, you don’t want the water to be too hot. The mid to high 20s are ideal. If you’re hoping to use your swim spa more like a hot tub, you’ll want to crank the temperature up to about 40 degrees centigrade.

How Energy Efficient Is A Swim Spa?

The energy efficiency of a swim spa is controlled by several different factors. Swim spas can be installed as inground or above ground units. Everything else being equal, inground units will be inherently more energy efficient because of the insulation provided by the ground surrounding the water tank. That said, insulation around the shell and water tank of above-ground models can make them quite energy efficient as well. This insulation can also take advantage of the heat created by the water pump motor. Another way to increase energy efficiency is to purchase a model that features a pressurized filtration system. This system allows the water to be filtered much more quickly than conventional systems thereby reducing the amount of energy needed to keep the water clean. Another feature to look out for are thermal vents. These helps regulate water temperatures by trapping heat in warm weather and allowing it to escape in hot weather.

Should You Constantly Heat the Water?

How you keep your water heated depends on how often you use your swim spa. If the swim spa is being used on a regular basis, it’s much more energy-efficient to keep it at a constant temperature rather than turning it off between uses. If your swim spa isn’t being used very often, it might make more sense to heat it just in time to be used. However, you’ll need to plan ahead as it will take awhile for the water to get up to temperature. If you’re not planning on using your swim spa in the winter, it’s best to drain it rather than allow the water to freeze as this can cause damage.

If you want to learn more about swim spas, download a free buyer’s guide today.