Home » Blog » What’s the Difference Between Hot Tub and Spa? 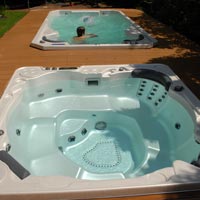 If you’re in the market for a hot tub you may have noticed that many retailers use the term “spa” quite often. Are they referring to something that’s different than a hot tub or are they talking about the same thing? To try and clear things up for the potential buyer we’ve come up with an article that tries to answer the question, “What’s the difference between hot tub and spa?” As you’ll find out when you read this piece, the answer to this question may not always be completely definitive.

What Are Hot Tubs?

In the simplest sense of the term, a hot tub refers to a tank of warm water. Of course, this might not be specific enough for our purposes here. If you told your friends and neighbours that you had a hot tub and then brought them to your bathroom and showed them the bathtub full of hot water, they would probably think that you’re a little cuckoo. When the average person thinks of a hot tub, they’re more than likely thinking about a unit with dedicated seats or a bench with room for at least two people, often many more, and has massaging jets that causes the water to swirl and bubble.

Commercially sold hot tubs in North America are actually a relatively recent occurrence. They became popular on the mass market sometime in the late 1970s. These were the classic, round cedarwood hot tubs that bring to mind California’s laid-back attitude. Since then hot tubs have undergone a revolution with different types of tank materials, water propulsion systems, heaters and an entire side market of accessories and add ons. It’s even gotten to the point where portable hot tubs can be rented out for a weekend with the unit loaded in and out on the back of a truck in a matter of a few hours.

In the classical sense, spas refer to facilities where all types of body treatments, such as massages, facial treatments and skincare can occur. This may also include the use of hot tubs. That said, many hot tub retailers these days use the terms “spa” and “hot tub” interchangeably. While “going to the spa,” having a spa day” or taking a “spa break” are still all phrases that refer to treatment centres based in hotels or recreation centres, the actual word “spa” can be seen in hot tub advertisements, trade magazines and showrooms with greater frequency. Perhaps this has something to do with the more elegant nature of the word “spa” compared to “hot tub” and was appropriated by the mind of a marketing executive.

It seems that we’ve reached a point where “spa” and “hot tub” can mean the same thing whereas “spa” is also still used to describe a type of facility rather than an appliance. Some people insist that a hot tub refers to the old school cedarwood tubs with bench-type seating while a spa has an acrylic interior with molded seating and multi-level water jets. But if you peruse the industry literature, visit showrooms and talk to dealers, you’ll find that many of them will use either word to describe the exact same thing. You likely won’t be chastised for using either term to describe a small pool of warm water, but you may confuse those who like to take mini vacations to get a massage and their nails done. Spa or hot tub? These days, apparently, it’s up to you.